On this episode of Overly Conversated, we honor the one and only Kobe Bryant. The Los Angeles Lakers legend and international icon tragically died with his daughter Gigi in a helicopter crash on January 26, 2020. We analyze the Black Mamba's global impact and what he meant to Hip Hop.

On the first Overly Conversated episode of 2020, we look back on our Top 10 albums of 2019 featuring a wide range of artists including Baby Keem, ScHoolboy Q, Freddie Gibbs and Madlib, Roddy Ricch, Skepta, JPEGMAFIA, Maxo Kream, Denzel Curry and of course Tyler, The Creator. 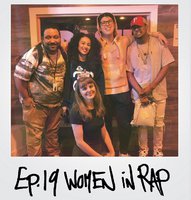 We list our Top 5 women in hip-hop and debate accordingly. Lil Kim, Missy Elliott, Lauryn Hill, Gangsta Boo, Queen Latifah, Nicki Minaj, Rapsody, Cardi B and so many more have made a name for themselves in what tends to be known as a sport for the guys.

Los Angeles native Andrea Aguilar has always had a strong passion for Hip Hop and journalism.

She created allabouteminem.com at the age of 15 and garnered media attention from publications like the LA Times and MTV. She was granted the opportunity to meet Eminem after his publicist took notice and eventually landed a job at Interscope Records.

She has written articles for various blogs and outlets including HipHopDX and worked in social media for Puff Daddy's REVOLT TV as a member of their Digital team. She has interviewed artists like Snoop Dogg, The Game, Pusha T and Big Sean.

You can listen to her on the Delicious Vinyl Station via Dash Radio Mondays at 10pm.